Planning with SurveyLA in Southeast LA 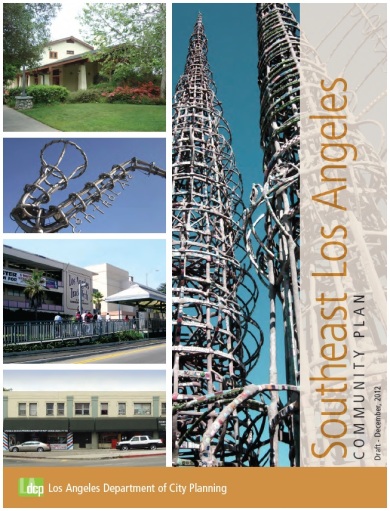 How much of what land uses should go where? How should we get around town? What should we do to preserve and benefit from our history? These are some of the key questions that the community of Southeast Los Angeles is grappling with as it prepares a new Community Plan, a draft of which was just released. According to the Plan’s website, the Draft Plan will “shape the future of your community for the next 20 years, guiding future growth, protecting neighborhood character, creating new economic opportunity, and enhancing the quality of life for all who live, work visit and invest in this area.”

SurveyLA’s impact on the Draft Plan can be seen in two key areas: the “Community Background” section (beginning on page 2-1) and the “Historic Resources” section (beginning on page 3-44). The Community Background section gives a narrative historical overview of the area that bears a strong resemblance to the narrative in SurveyLA’s Southeast LA Historic Resources Survey Report. Both documents discuss the importance of streetcars and Downtown Los Angeles in the area’s early development, the rise of the African American community in the early 20th century (in part due to restrictive racial covenants that barred them from other neighborhoods), the consolidation of the former City of Watts into Los Angeles and the economic decline of Central Avenue after World War II. The Plan also discusses the history of Native Americans (Tongva) in the area prior to Spanish colonization, the Mexican Period and the transition to U.S. rule. Additionally, the Plan takes up the economic and land use impacts of the loss of industrial jobs and how relatively recent waves of immigration from Mexico and Central America have created a Latino majority in the area.

In the Draft Plan’s Historic Resources section, SurveyLA’s impact is even more clearly felt. The Draft Plan starts by making a case for historic preservation, noting that it ensures “continuity of neighborhood identity and pride within the community” and that “communities throughout the nation have used preservation as a successful tool to promote revitalization and economic development.” As for SurveyLA itself, it “has identified many potential resources including individual properties, non-parcel resources and planning districts.” In particular, the plan notes two areas that are “under active consideration” to become Historic Preservation Overlay Zones (HPOZs, City-created historic districts). Unlike South Los Angeles, just to the west, Southeast Los Angeles currently has no HPOZs.

The Draft Plan doesn’t stop with a hat tip to SurveyLA, it also includes several goals and policies to advance respectful treatment of historic resources. These include:

The Southeast LA Draft Community Plan is part of an ongoing process that the public is encouraged to participate in. Future steps include presenting a Draft Environmental Impact Report, holding an open house and public hearing, and presenting the results to the City Planning Commission and City Council for approval. Other neighborhoods in Los Angeles are benefiting from SurveyLA’s work as they update their community plans. To find out more, visit the Department of City Planning’s website and click on “New Community Plans.”

Did we miss anything when we surveyed Southeast LA? Do you have a tip on a historic place in another LA neighborhood? If so, please let us know!

I am here to bring you cheer...about LA's historic resources!
View all posts by SurveyLA →
This entry was posted in Uncategorized and tagged Community Plan Updates, Southeast LA, SurveyLA Reports. Bookmark the permalink.